The mission of our organization is built upon six pillars. The players will:

The most important and founding principle of our program is that we, as coaches, will instill character traits in our student-athletes to create high-quality young men who will be assets to society and improve the lives of those around them. Success and accolades will always rank near the bottom of our measures of actual achievement.

Regner Park, which hosted the State Tournament the first 24 summers

Arrowhead baseball, as it is known today, began when the school opened in 1956. Upon its inception, it was a spring sport. The Warhawks even advanced to the state tournament in its first season (1957), losing to eventual state champion Eau Claire, 18-6 in the state quarterfinals. However, when summer baseball became a WIAA approved sport in 1965, the school would ultimately decide to join many in southeastern Wisconsin and make the jump, though not until 1970.
It wasn't long before the school established itself as a summer powerhouse. The school qualified for state in 1973 under Head Coach Gordon Gill and advanced to the state championship game before falling to Sheboygan Falls, 9-2. However, it wasn't long before the Warhawks were back in the state final. This time, in 1975, under new 1st year Head Coach Tim O'Driscoll. Arrowhead again came up short, falling to Brown Deer, 9-1.
1979 proved to be the year the Warhawks broke through. They had a team loaded with talent and won a thrilling state championship game against West Bend East, 4-3, capturing the school's second state championship (outside of their previous 1965 state track title). 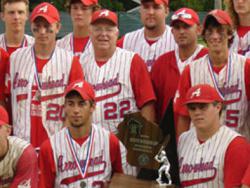 Throughout the 1980s the Warhawks would battle in the competitive Braveland Conference. The early 90s saw their travel increase as they played the likes of Muskego, Franklin, and others in the Southeast Conference (SEC). 1998 saw the school play its first season in the newly formed Classic 8 Conference. It wouldn't be until the late 90s before they would make a return trip to the state tournament.

In 1999, the Warhawks advanced to the state quarterfinals but fell. They made a return trip the following season. This time they would advance to the state semifinals. The Warhawks defeated Campbellsport in the quarterfinals, 9-4. However, after rain delays they ran into a tough Brookfield Central squad and fell, 6-2. The team would go on to compete for multiple sectional titles before breaking through in the 2006 season. That team would go on to advanced all the way to the state championship game. Along the way they would defeat Kewaskum, 8-1, and Ashland, 5-2. However, the 2006 title game saw their luck run out as they lost to Marquette, 5-3. 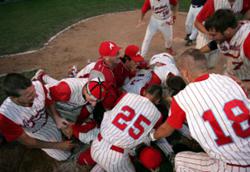 2009 was an exceptional season, even for a program full of history. The team made history multiple times. They were, and still are, the only team to go undefeated in their conference schedule, tallying a 21-0 record in Classic 8 play. The team would advance to the state tournament in Stevens Point where they would defeat West Bend West, 6-4 in 8 innings. They would go on to win a slugfest with future conference member Muskego, 14-10. In the state title game, the team would again square off with Marquette. The Warhawks would fall into a 4-1 hole heading into the bottom of the 7th inning. From there the Warhawks went to work. Arrowhead would tie it up with 2 outs and the bases loaded before a single off of the center field wall ended the game in walk-off fashion. 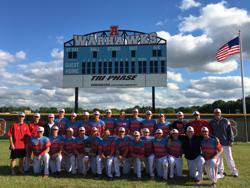 The Arrowhead baseball team would continue to be competitive and play in the Classic 8 Conference. That is until the 2014 off-season. Led by Coach Vince Mancuso, the Warhawks made the switch to play in the spring for the first time since 1969. Arrowhead moved into the Wisconsin Little Ten in 2015 with Catholic Memorial and Slinger and immediately found success advancing to the sectional final. But it was in 2016 that the Warhawks would break through. Completing their second straight undefeated conference season, Arrowhead would go on to advance to their first spring state tournament since 1957. Playing in Appleton the Warhawks would defeat Sun Prairie, 6-1, in the state quarterfinals. The following night Arrowhead would take on football rival Kimberly and prevail, 2-1. That set the stage for a showdown with Burlington in the state championship game. Despite jumping out to a 4-0 lead, the Warhawks' bats would go cold and they would eventually fall, 6-4. However, they would finish the season an impressive 29-3.

O'Driscoll Field is the home of the Warhawks varsity team. Dedicated to longtime and Hall of Fame Coach Tim O'Driscoll in 2010, the field features two covered dugouts, a batting cage, bullpens for both teams, and a new scoreboard with inning-by-inning scoring.

The JV Field plays host to the junior varsity & freshmen teams in the Arrowhead program. It is situated near South Campus by the varsity softball field. Enter through the South Campus entrance off of North Avenue. Park behind the south end of Taraska Stadium. Visitors will need to walk from the parking lot to the field.